MARIA KULCHYTSKA (1835–1872), the poet's mother, who came from the family of so-called "szlahta zaściankowa" (impoverished nobility who wore slippers instead of boots). The family tree goes back to Yuriy Kulchytskyi, hero of the Vienna battle and founder of coffee houses, where coffee was not drunk not Turkish style (bitter) but with cream and sugar.

MUSEUM (from Old Greek "House of Muses'), an institution called to preserve, study and popularize monuments of nature, history and culture as well as renowned personalities.

Museums which cherish the memory of Ivan Franko have been set up in the poet's native village of Nahuievychi, the village of Kryvorivnia in Hutsul Carpathians, where he loved vacationing, and in the capital of Ukraine – Kyiv. Yet, the most important of them is the Ivan Franko Lviv National Literary and Memorial Museum. It is also known as the Franko House as it is located inside the writer's own home at 4 Poninskoho St. (current 152 Ivana Franka St.) near the villa of renowned Ukrainian historian and politician Mykhailo Hrushevskyi, which has also been made into a museum.

What is interesting, is that Franko and Hrushevskyi are neighbours not only on the map of Lviv (they lived close to each other and had many joint projects) but also on money. Their portraits may be found on Ukrainian national currency – 20 and 50 UAH bills.

"MOSES", a philosophical poem by Ivan Franko, in which the poet in an original manner portrays the Old Testament prophet who led the people of Israel out of the Egyptian slavery when called to by Jehovah. The plot canvas is based on Biblical story, yet the author endows it with a fable context. The hardships of Israelites in search of the Promised Land are an allegory to Ukrainians who are striving to create their own state. And the figure of the prophet, whom Franko called "the most grandiose figure in the ancient history of mankind", becomes the projection of the author himself. That is why since publication of the poem, Franko has been called the Ukrainian Moses and the poem is considered the archwork of the poet-thinker, his political testament and a masterpiece of the Ukrainian literature. 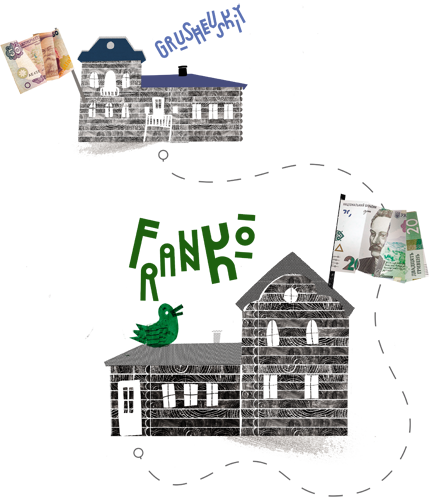