FOREST, natural landscape covered in trees and bushes. Forest was Franko's favourite place for rest and creative inspiration. We may call him a poet of the forest.

As a child, he wandered along forest paths. As a gymnasium student, he went to the forest to catch bats, junebugs, grass snakes and snakes for the zoological collection of Professor Ivan Verkhratskyi. As a young man, Franko often had meetings with his fiancée Olha Roshkevych in a forest near Lolyn. As a grown man, he went to the forest with kids and friends. Many of Franko's fairy tale characters are forest inhabitants. In his free time Franko loved going to the forest for mushroom hunting – he knew a lot about them, distinguished between edible and poisonous ones and already knew their Latin names back when he was a gymnasium student.

"Ivan Yakovych went to the forest barefoot, carrying a basket, and very rarely a cane," his son Taras reminisced.

"Franko always brought the most mushrooms as he looked for them very attentively," Ivan Yatsuliak, the writer's school friend, noted.

He went fishing with friends, acquaintances, colleagues, locals and his family. He enjoyed fishing with a net and landing nets, not a fishing rod; sometimes he caught fish with his bare hands. His fishing basket was rich and varied. Images of fish decorated the walls of rooms at his villa – he received them as a reward during Lviv General Regional Exhibition, which took place in Stryiskyi Park in 1894, for being able to give Latin names of all those fish.

"FOX MYKYTA", fairy tale poem by Ivan Franko about a sly Fox who emerges victorious under adverse circumstances. The poem was published in 1890 in Lviv children's journal Dzvinok (Bell) and was a great success – it became a best-seller and was even included into school first reader. For adult readers Franko's text embodied subtle satire on social order and unstable judiciary.

According to his contemporaries, Franko was not picky about food – one of favourite dishes was fried mushrooms with new potatoes. For breakfast he would have a cup of coffee and a bun. His lunch consisted of soup or broth. He loved mineral water and teas, which were not very popular in Halychyna at the time.

Dissolve a packet of dry yeast in half a glass of warm milk, adding half a spoonful of salt and a spoonful of sugar. When the yeast activates in a warm room, pour the mixture into a warm bowl, add two more glasses of milk and two cups of flour. Stir everything and cover with a piece of cloth. Give it an hour for the dough to rise. As soon as it rises, add 2 to 4 eggs (if the pie is sweet, add two spoonfuls of sugar) and the remaining flour and knead. When the dough no longer sticks to your hands, add half a cup of clarified butter and knead again. Put in a warm place and give it an hour to rise. The dough should be fluffy, not firm, otherwise the pie will turn out dense. When the dough has risen, divide it into three parts (the third one, for decoration, should be smaller). Grease the baking pan. Roll out one part of the dough and place it inside the baking pan. Put the filling on top. Roll out the second part of dough and place it on top of filling. Make thin rolls out of the third part of dough, use them to braid the edges and write the person's name. Cover the pie and put it inside the baking pan for another half an hour. As soon as it rises, grease with beaten egg and put the pie into the oven for an hour. Bake at 350˚. After 45 minutes, increase the temperature to 400˚ to give the pie a nice crust.

Meat filling: You can prepare it a day in advance. Fry chopped meat and finely chopped onions on butter, add salt (one may also add some pepper). Don't forget to stir. When ready, remove from the fire. Chop two hard-boiled eggs and mix with meat. Let it cool down. Before you put the filling into the dough, add a raw egg and mix well so that that the mass sticks together. 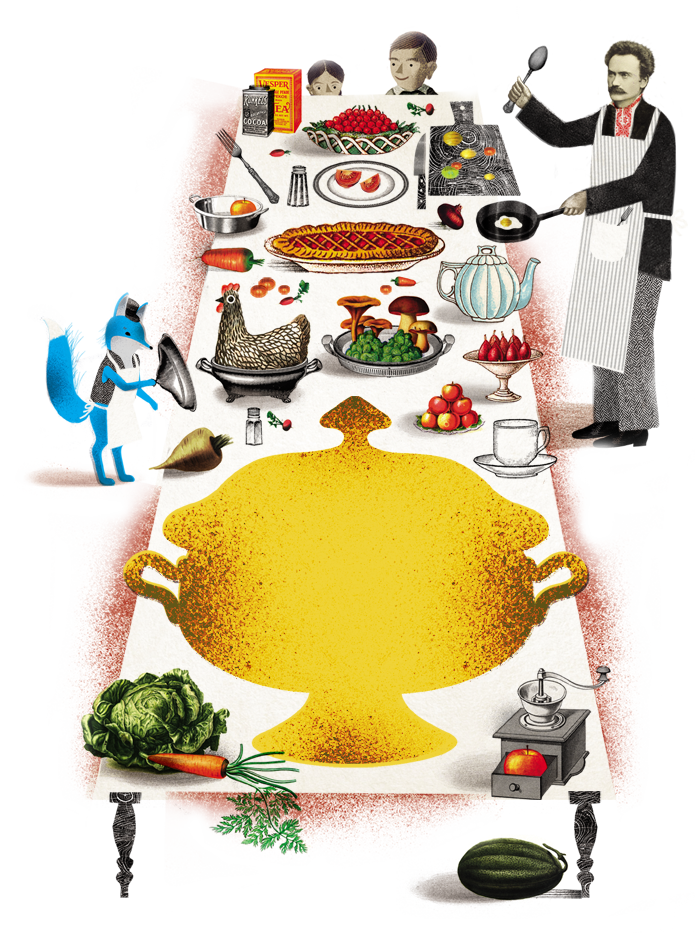